Miyana has seven supercontinents, each comprised of a large number of geological plates. 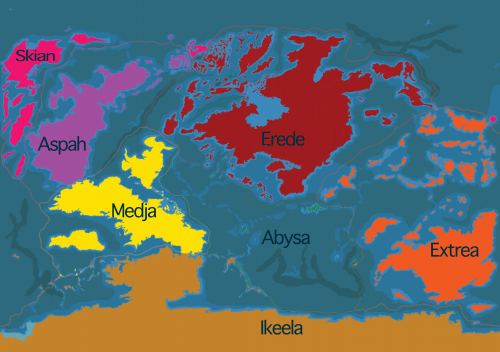 The supercontinents of Miyana

Comprising much of the vast and furious oceans with only small specks of land, Abyssa is around one third of the southern hemisphere, and extends north of the equator as well. Abyssa touches Ikeela to the South, Medja to the West, Erede to the North, and Extrea to the East. Abyssa is comprised of 31 geological plates and is home to the nations of:

Aspah, found in the north-west of Miyana, covers all zones from equatorial to the edge of polar. Aspah is surrounded be Medja to the south and east, Skian to the West and North, and Erede to the East. Aspah consists of 25 geological plates and is home to the nations of:

The most diverse supercontinent in the terrain it offers, Erede occupies a large portion of the northern hemisphere, around the Prime Meridian and a long way to either side. Around the supercontinent are the others of Abyssa to the south, Medja to the south-west, Aspah to the East, Skian to the North, Extrea to the East and South-East, and Abyssa to the South. Erede consists of 51 geological plates and is home to the nations of:

Comprised in roughly equal parts of islands and continental land mass, Extrea defines much of the Eastern portion of Miyana. Extrea borders (all other supercontinents(to check)). Extrea consists of 50 geological plates and is home to the nations of:

Ikeela occupies the southern pole of Miyana, with a large northward projection meeting Medja in the west. Ikeela also meets Abyssa and Extrea at its northern central and north-eastern edges respectively. Ikeela consists of 37 geological plates and is home to the nations of:

Medja is largely equatorial, tropical, or sub-tropical. Located In the west of Miyana, and abutting Ikeela to the south, Extrea to its West, Aspah and Erede to its North, and Abyssa to its east. Medja is the evolutionary home of Humanity, with all living Humans having descended from one or more of the five major migration events and/or the population that remained in the original native range. Medja consists of 34 geological plates and is home to the nations of:

The Northern great circle, as well as much of the area either side of the International Date Line is dominated by the supercontinent known as Skian. Whilst the continent has many large islands, it is largely covered in water or ice. Skian contacts Aspah to the East and South, as well as both Erede and Extrea to the south. Skian consists of 52 geological plates and is home to the nations of:

This page lists the principal waters of Miyana with their main attributes according to their classification.

The International consensus boundaries between oceans

Miyana is approximately 68% covered by oceans, with the remaining 32% comprising land 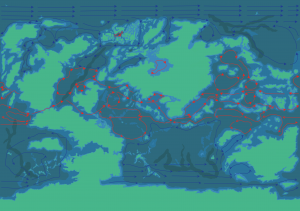 The Gulf of No Return

Jaw of the New World

A supposed maritime anomaly zone stretching from the tip of Courelli, to Ceni, and the edge of Hirematia. Evidence for actual anomalies is sparse.

Climate fluctuates significantly on Miyana according to many factors such as altitude, proximity to coast, foliage, variation, longitude, air and water currents, and other factors. However, general patterns exist, which define many of the systems that themselves influence climate zones. 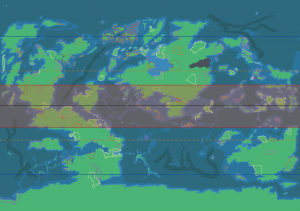 A number of abstract lines are drawn that approximate factors that influence Miyana’s climate either side of them.

Shown opposite in black, the equator is defined as equidistant from the geographic north pole and geographic south pole. The equator has the distinction of, on equinoxes, having equal duration days and nights. Further, temperatures tend to be the most stable as sunlight angle and duration varies least according to time of year.

Shown in blue. Defined as the points furthest from the respective pole where the sun is visible above the horizon for 24 hours continuously (on the solstices). On Miyana, these occur at 58.8 degrees north and south respectively, and are called the Serkaskyian Cirlce in the northern case, and the Ikeelun circle in the southern.

Highlighted by red lines, and the translucent red intertropical zone, the tropics are the areas furthest from the equator, at which the sun may be seen as directly overhead (Summer solstice in the north, winter solstice in the south). The tropical zone typically is warm and has limited seasonal variation, often expressed as a dry season and a wet season. On Miyana the tropics are found at 18 degrees north and south.

Illustrated by dashed orange lines, the subtropics are not defined through any relation, as the other parallels are, but rather simply as a zone between the tropics and the temperate zone. On Miyana the boundary is defined as 28.8 degrees north or south of the equator.

Moon 1 is one of Miyana's two natural satellites, with a grey, rocky surface pockmarked with craters and seas.

Miyana and her natural satellites, Miyana I and Miyana II, to scale.

Moon 2 is one of Miyana's two natural satellites, appearing as a small, sandy-colored dot in the sky.

Humans are a species of Great ape (Hominidae) native to a small portion of the supercontinent Medja, on the planet Miyana. The species has naturalised to most of the land area of the planet. Humans are distinct in their degree of sapient thought, foreplanning, sentience, and ability to manipulate tools and their environment. Highly morphologically and phenotypically diverse, humans have also formed a wide variety of societies and cultures. 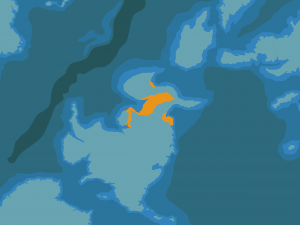 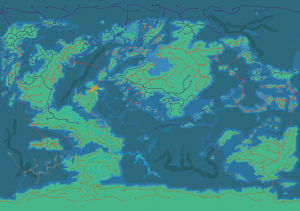 Map showing migration during the early prehistory period. Colours of arrow and path indicate which of the six known events of humans leaving their native range was the origin of that population in primacy.

Many methods of timekeeping, as well as discrete conceptions of the notion of time itself exist on Miyana. The most common form, and the form utilised for international trade and diplomacy, known as Miyana International Time uses a 24 hour fixed day, 7 day week, 400 day per year standard, as well as time zones centred around the prime meridian in Hiremattia. Various standards are described below. 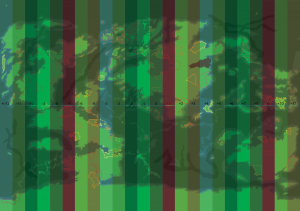 Miyana International Time, used as the common international timekeeping and coordination standard, splits time into fixed duration units consisting of seconds, minutes, hours, days, weeks, months, and years. These are defined as 60 seconds are equal to a minute, 60 minutes to an hour, 24 hours to a day, 7 days to a week, 400 days to a year. There are 13 months in this calendar.

The following serves as a general reference for international communications on Miyana. Listed below are Dialing Codes and Top Level Domains organized by supercontinent. Time zones are given in Miyana International Time, and tables are ordered by ascending dialing code.

Currently unused and reserved for potential future expansions or nations.

Travel consists of moving people, objects, goods, or vehicles from one place to another, and may be done in a number of ways, common forms are detailed below in addition to speeds, and time taken to travel on major routes by a number of means.

Please use the most similar animal from the following list for an approximate speed, if towing a vehicle reduce speed by 10%

Other Human or Animal Powered 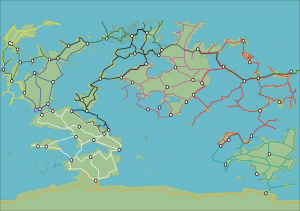