From The Library of Parliament
Jump to navigation Jump to search
Main article: Erynia and Draconia 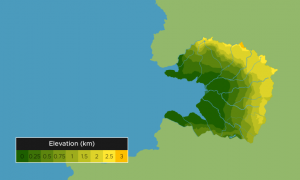 Height map of Erynia and Draconia

Erynia and Draconia's territory is located near the center of the supercontinent Erede on the planet Miyana. It borders the Gulf of Erynia, part of the larger Asawagi Ocean, to its west; the Asortain Mountains to its east; and the Venirian mountains to the north. The nation occupies a large stretch of relatively flat land called the Ravellian Plain. Several rivers run through the Ravellian Plain such as the Dracon River, Cylin River, and Erbyn River. The tall mountains, which are less friendly towards civilization, have served as a natural barrier. 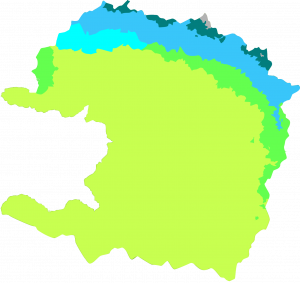 Most of the nation has a humid subtropical climate (Cfa), with some regions having a humid continental (Dfa/Dfb), oceanic (Cfb), and Subarctic (Dfc) climates. Some places at extremely high elevation in the Venirian Mountains have a tundra (ET) climate. Erynia and Draconia receives a significant amount of rainfall, especially in the mountains. Its fertile soil and temperate climate has made Erynia and Draconia a perfect place for human civilization, and is thus a highly populated nation.

- The Humid Subtropical climate (Cfa) is by far the most common climate type in Erynia and Draconia. It is mostly found across the Ravellian Plain. This climate features hot and wet summers and cool winters.

- The Oceanic climate (Cfb) is found in places of high elevations and in the states of Nourteton and Nourte Erynia on the coast. This climate has pleasantly warm and wet summers and cool winters.

- The Warm-summer humid continental climate (Dfb) is found in much of the Venirian Mountains and the northern parts of the Asortain Mountains. Summers are warm and wet, while winters are cold and snowy.

- The Hot-summer humid continental climate (Dfa) is found in the northernmost inland parts of the Ravellian Plain. Summers are hot and wet and winters are cold.

- The Subarctic climate (Dfc) is found in areas of very high elevation in the Venirian Mountains and parts of the Asortain Mountains. Summers are cool and wet, while winters are very cold and snowy.

- The Tundra climate (ET) is found in places of extremely high elevation in the Venirian Mountains. Summers are cold and wet and winters are extremely cold and snowy. 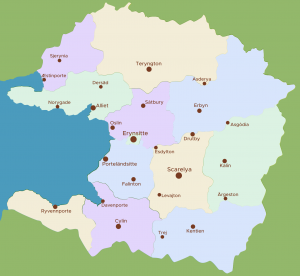 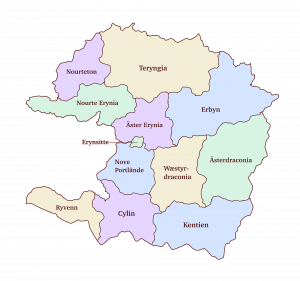