Erynia and Draconia (/ɛɾɪŋa ɛd dɾakɔŋa/), officially the Democratic States of Erynia and Draconia (Ravellian: Dæ Städen Démograden Erynia ed Draconia), is a country that is located on the continent Erede on the planet Miyana. It borders the Gulf of Erynia (part of the greater Asawagi ocean) to the west, the Venirian Mountains to the north, and the Asortain Mountains to the east. The nation has a population of 196,153,100 and a land area of 1,441,828.877 mi2. The most widely spoken language is Ravellian, with 78% of the population speaking it as a first language. Erynia and Draconia is a relatively linguistically diverse nation, with several dialects of Ravellian being spoken throughout the country.

The current president is Lukas Daniels and the Prime Minister is Lèslye Smydt. The bicameral legislature, the Federal Congress, meets in the capital and second largest city, Erynsitte. Erynia and Draconia is a robust multi-party democracy and is often described as a social democracy due to its democratic nature, mixed economy, and strong welfare state. The country's motto is "Pax, libyre, ed ègālya", meaning "Peace, freedom, and equality".

Since 1965, Erynia and Draconia has been a member of the Social Liberal Union (SLU), an international organization committed to fostering peace and prosperity across Miyana. It is also a founding member of the Alliance of Eredean States (AES).

The nation name "Erynia and Draconia" dates back to ancient times. "Erynia" is thought to have originated from the "Great Protector Aranys", a revered ruler of a conglomeration of cities in the ancient era. "Aranys" eventually became "Erynes", which became the name of an ancient kingdom. "Erynes" evolved to become "Erynia", the name of a long lasting kingdom that merged into the Kingdom of Draconia in 1869. In Ravellian, the suffix "-ia" denotes a land, society, kingdom, or realm. "Draconia" comes from the name "Dàrgoni", the family name of the first dynasty to rule the Kingdom of Draconia. "Dàrgonia" (Dàrgoni with the -ia root added on) eventually transitioned to "Draconia".

Since ancient times, the Ravellian Plain and its surrounding areas have been inhabited by Ravellians, Kanathians, Venirians, and Ryvennics. The region was first inhabited by nomads from south of the Ravellian Plain in central Erede. For almost all of the region's history the land was not united, but under many separate kingdoms or civilizations. The land finally unified in 1869 under the Union of Erynia and Draconia. After both peaceful and violent civil unrest, the monarchy was abolished in 1956 and the Democratic States of Erynia and Draconia, a federation of 12 autonomous states under one democratic government and constitution, was established. The current constitution came into effect on 29 January 1995.

The politics of Erynia and Draconia operate under the framework of a federal semi-presidential republic. Since 1995, the Second Constitution of the Democratic States has been the supreme governing document of the nation. The executive branch is jointly run by the President, currently Lukas Daniels; and the Prime Minister, Leslye Smydt. The President is the head of state and is elected directly by the people, while the Prime Minister is the head of government and is appointed by the Assembly of Delegates, the lower house of congress. The country's bicameral legislature is called the Federal Congress, and is composed of two chambers: the Assembly of Delegates and the Senate. The judicial branch is made up of the Federal Courts. Erynia and Draconia is a federation of 12 states who have a significant amount of autonomy. Each state has its own legislature and chancellor.

This article lists the federal political parties of Erynia and Draconia.

Erynia and Draconia's territory is located near the center of the supercontinent Erede on the planet Miyana. It borders the Gulf of Erynia, part of the larger Asawagi Ocean, to its west; the Asortain Mountains to its east; and the Venirian mountains to the north. The nation occupies a large stretch of relatively flat land called the Ravellian Plain. Several rivers run through the Ravellian Plain such as the Dracon River, Cylin River, and Erbyn River.

Most of the nation has a humid subtropical climate (Cfa), with some regions having a humid continental (Dfa/Dfb), oceanic (Cfb), and Subarctic (Dfc) climates. Some places at extremely high elevation in the Venirian Mountains have a tundra (ET) climate. Erynia and Draconia receives a significant amount of rainfall, especially in the mountains. Its fertile soil and temperate climate has made Erynia and Draconia a perfect place for human civilization, and is thus a highly populated nation. 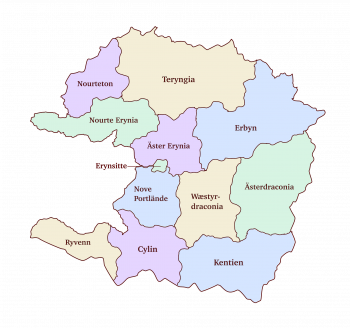 State map of Erynia and Draconia

Each state has a Chancellor as its head and a legislative body called the Argrako Städeàle. Below the state level, each Äraén has a board of representatives called the Sdyred Äreàle. At the municipal level there are communal councils called Räden Comùnalen. Some communes have leaders, whether they be popularly elected mayors or council-elected council speakers. 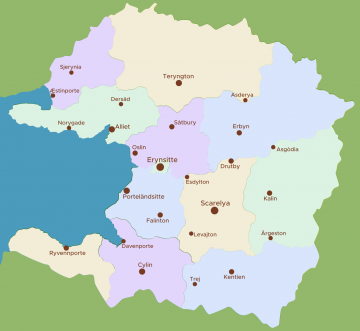 Erynia and Draconia has a mixed economy. It has a substantial amount of both private industry and public industry. Erynia and Draconia's currency is the Eryconian Dollar (Ravellian: Dollare Eryconiy). The nation has a large and very strong economy, and trades with many nearby SLU nations such as Prplia and Koiho. It also has a free trade agreement with Courelli. Its economy is diversified and the service sector is prominent. Taxes are high and fund a comprehensive welfare system, universal healthcare, and many other social services that Eryconian residents enjoy.

Information technology is a major industry of Erynia and Draconia. The country exports a significant amount of computer parts and software.

Agriculture is not a prominent faction of the Eryconian economy, but the nation has a good deal of arable land. Much of the Ravellian Plain is ideal for agriculture, especially maize, soybeans, wheat, and rice. 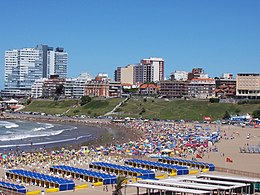 Erynia and Draconia is one of the top tourist destinations in the Social Liberal Union due to the country's rich culture and history and its beautiful environment. Popular tourist activities include: Cycling, going to the beach, skiing in the Venirian and Asortain Mountains, visiting historical landmarks, hiking in national parks, eating the wide variety of food the country has to offer.

The largest religion in the nation is Érdinæsm (44%), but a large percentage of the population does not adhere to any religion (47%). 9% of the population follows other religions such as Dalinism. Érdinæsm is a polytheistic religion that originated in modern-day Nourte Erynia.

Fireworks celebrating the anniversary of Erynia and Draconia becoming a republic

Major Eryconian holidays include Republic Day on May 17th, the day Erynia and Draconia became a republic; and each of the solstices and equinoxes.

The vernal equinox, which marks the beginning of spring, is a celebration of life, renewal, and prosperity. It is celebration that often entails a redecorating of one’s house, especially the window curtains (which change to a green or teal color). The summer solstice marks the beginning of summer, and the celebrations that occur then vary from state to state. There are often parades, late night parties, and day trips to the beach (or any body of water). The autumnal equinox often entails parties and family gatherings. It represents solidarity and preparation for winter. It also celebrates the harvest of foods that were grown in the summer. The winter solstice is often seen as the new year that comes before the new year. The nation reflects on the past year and puts an emphasis on self-reflection.

Common foods of Erynia and Draconia include Sarasdogo, a noodle dish; Myrsake, a savory muffin; Eifervayn, a savory pie; Koerre-Syan, a stir fry; and Amryonäe, a custardy ice cream served with edible flowers.

Erynia and Draconia has been a member state of the Social Liberal Union since 1968, five years after its founding. The Eryconian general public elects two delegates to represent the nation in the Union Convocation, the organization's legislative body. Additionally, President Lukas Daniels holds a seat on the SLU Council of Leaders. The two representatives currently are Esyla Meràlne and Jyan Kordorra.

Erynia and Draconia is a member of the World Assembly. The nation's votes on WA resolutions are usually decided via referenda.