The Republic of Brys Questions is a colossal, efficient nation, ruled by Bris with a fair hand, and notable for its keen interest in outer space, irreverence towards religion, and punitive income tax rates. The compassionate, democratic population of 5.389 billion Brys questionsians are free to do what they want with their own bodies, and vote for whomever they like in elections; if they go into business, however, they are regulated to within an inch of their lives.

The enormous, outspoken government juggles the competing demands of Education, Industry, and Environment. It meets to discuss matters of state in the capital city of Sköldpadda. The average income tax rate is 76.4%, and even higher for the wealthy. The frighteningly efficient Brys questionsian economy, worth 375 trillion Sköldpadda myntas a year, is driven entirely by a combination of government and state-owned industry, with private enterprise illegal. However, for those in the know, there is a large, well-organized, quite specialized black market in Tourism, Basket Weaving, and Information Technology. The private sector mostly consists of enterprising ten-year-olds selling lemonade on the sidewalk, but the government is looking at stamping this out. Average income is 69,754 Sköldpadda myntas, and distributed extremely evenly, with little difference between the richest and poorest citizens. 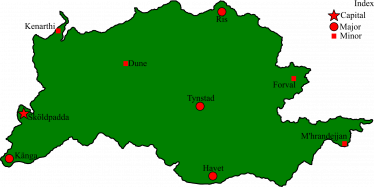 Foreign casinos have trouble paying fans who bet on the Sköldpadda Turtles' triumph against long odds, the nation is renowned abroad for its love of blood and guts, school lockers are filled with fancy underwear, and nouveau riche farmers diligently take care of their golden calf herds. Crime, especially youth-related, is totally unknown. Brys questions's national animal is the Turtle, which frolics freely in the nation's sparkling oceans, and its national religion is Atheism.