For a complete list of offices held, see here.

Administrator of the Government

The Administrator of the Government of the Federal Republic of Anaaxes, often referred to as simply the Administrator, is the head of the Anaaxese state and is responsible for ensuring that each of the three constitutional branches of government are fully constituted at both the federal level and across all the provinces. The position is non-partisan in the general sense, although in reality the office has always been held by a self-professed socialist of various types. Belonging to no particular of the three traditional branches of government, the Administrator may upon a constitutional crisis or other extreme emergency, use certain reserve powers, such as the suspension of the President or dissolution of the Parliament under specified criteria in the Constitution, until they can be ultimately resolved by the people at a general election or referendum.

The Administrator must be a citizen of Anaaxes of at least 22 years of age but no more than 68 years of age, and must have been domiciled in a province or territory of Anaaxes for at least 20 consecutive years prior to assuming office. The Administrator must not have held any federal or provincial elective office nor an officer position in any political party during their lifetime. They also cannot be related to any living or dead former President, Administrator, Chief Justice, Attorney General, member of the Constitutional Tribunal, or military branch Chief of Staff, within three degrees of consanguinity nor been married to any one during their lifetime. The Constitution also prohibits the Administrator from being married to or related to within three degrees of consanguinity of a current serving member or member-elect of either house of the Parliament of Anaaxes, or, to a governor or governor-elect of a province. The President also cannot appoint anyone related within three degrees of consanguinity to the current Administrator as a federal chancellor, ambassador, judge, or a flag officer of the armed forces for the Administrator's entire mandate plus two years.

The Parliament of Anaaxes is the national bicameral legislature of Anaaxes established by the Constitution of Anaaxes. It consists of the Federal Senate, which handles most day-to-day legislative affairs, nominations, and executive oversight; and the Federation Council, which primarily handles constitutional affairs, high-level nominations, judicial oversight, the regulation of certain professions, and matters affecting the federal union or provincial competencies.

The Federal Senate consists of 500 Senators in total. 400 Senators represent a single-member constituency of about 200,000 people, and are elected by instant-runoff voting to a term of four years, staggered so that half of the single-member district Senator seats (200) are up for election every two years. The remaining 100 Senators are elected nationally via closed party-list proportional representation to two-year terms. Therefore, 300 of 500 Senators face re-election every two years.

The Federation Council currently consists of 160 Councillors, both elected or selected as follows: 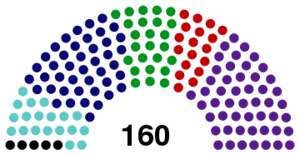 The President derives their power from either two sources: powers vested in the presidency itself and powers vested in the Apostolic See of Serenno. Any President elected by a national popular vote is entitled to execute both types of powers freely. However, an un-elected acting president cannot execute apostolic powers without the countersignature of an Apostolic Commissioner.

The Constitutional Tribunal consists of 12 Constitutional Auditors, which elect a Chairperson from among themselves every two years, who acts as the administrative head of the Tribunal and presides over its sessions and conferences. Auditors serve staggered terms of various lengths, depending on their selecting authority. If a vacancy occurs intra-term for an Auditor seat, the original selecting authority will fill the vacancy with a new Auditor who will serve for the remainder of the term. In the case of intra-term vacancies in presidentially-appointed Auditor seats, the President which originally filled the seat retains the right to appoint a replacement (with discretionary concurrence of the Administrator of the Government) if they are still alive, mentally competent, and if they were not impeached and removed from office as President, subjection to confirmation by either the Senate or Federation Council; otherwise, the full membership of the Judicial Conference of Anaaxes convene an extraordinary conclave for the purpose of nominating 10 candidates for the incumbent President to select one from to present to the Administrator of the Government for final discretionary approval.

Economy and Quality of Life